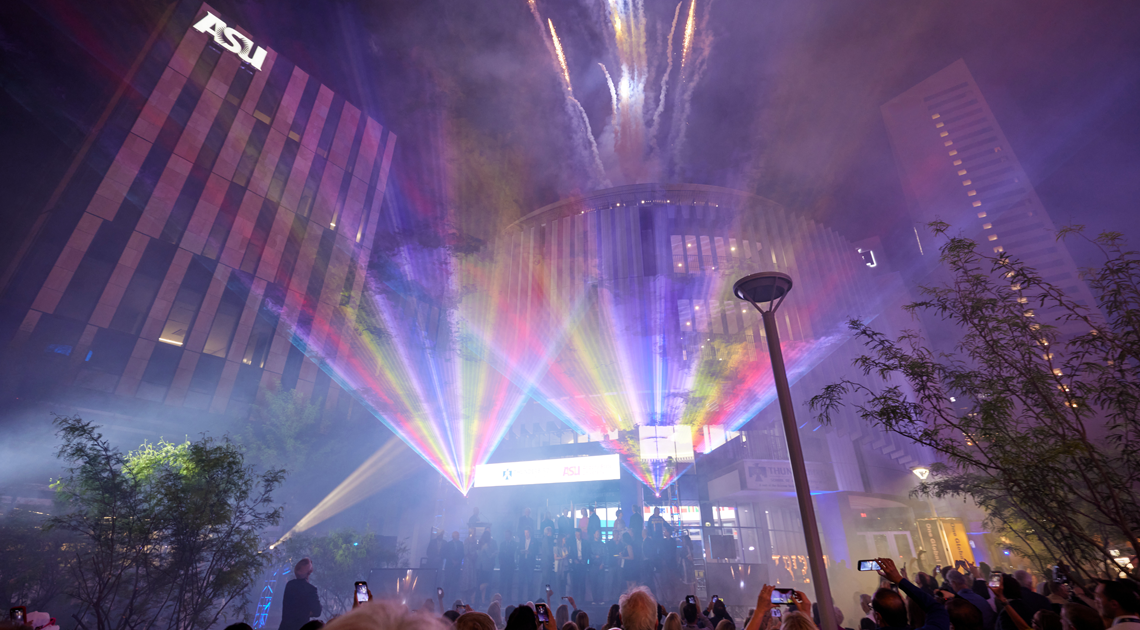 On April 8, the Thunderbird School of Global Management at Arizona State University celebrated the grand opening of its new state-of-the-art global headquarters in downtown Phoenix. The grand opening occurred during Thunderbird’s 75th anniversary global reunion week, which attracted over 2,500 alumni and students from countries all over the world.

During the event, Thunderbird unveiled the official name of the building as the F. Francis & Dionne Najafi Global Headquarters, which is named after ASU and Thunderbird alumni F. Francis ’77 and Dionne Najafi ’06 in recognition of their generous $25 million donation in support of global education.

“We set out to create a transformative headquarters that honored our 75 years of Thunderbird traditions and, at the same time, would be a beacon for global leaders and citizens from here in Phoenix, to greater Arizona, to the United States, and to all countries and regions across the world,” said Sanjeev Khagram, director general and dean of the Thunderbird School of Global Management. “This transformational gift from Francis and Dionne Najafi, as well as the generosity of so many of our alumni, has truly enabled Thunderbird to emerge as the vanguard in global leadership, management and business education.”

Designed by Moore Ruble Yudell and Jones Studio, the F. Francis & Dionne Najafi Global Headquarters spans 110,000 square feet on ASU’s Downtown Phoenix campus, next door to the Beus Center for Law and Society. The building broke ground in October 2019 and welcomed the first group of students in the fall of 2021.

“We are humbled and honored that Thunderbird’s global headquarters bears our name. This facility represents the growing prominence of downtown Phoenix and Thunderbird’s growing legacy,” said F. Francis Najafi on behalf of him and his wife, Dionne Najafi. “This proud institution transformed our lives, which is why we worked with Thunderbird to create a global initiative that will educate 100 million learners worldwide. I attended Thunderbird after immigrating to Arizona from Iran. The fact that this building carries the name of an immigrant sends a powerful message to all who aspire to achieve the American dream, no matter where they call home.”

The cutting-edge headquarters is spread over five floors and features state-of-the-art flexible classrooms and 1,600 square feet of displays with over 20 million pixels of direct-view LED screens showcasing presentations and events from around the world. The building also features a green-screen studio, as well as a full XR production and development studio, and a volumetric-capture studio that creates full three-dimensional renderings for faculty and student initiatives. This technology will be used to incorporate full immersive language learning, allowing Thunderbird students access to discovering a new language, and to meet with students and faculty from every corner of the globe.

“Thunderbird’s new, most technologically advanced global headquarters is a physical manifestation of our strategy to be the most global and digital leadership and management school in the world,” Khagram said. “Our vision is to become the Thunderbird Academy of Intergalactic Leadership over the next 75 years … and we are on our way!”

The building is designed to bring the world’s leading technology directly to the hands of Thunderbird students and faculty. The facility enables students to connect with the world and experience what they seek to learn and study in real time.

The Haas Digital Global Forum, on the first floor, features a unique, technology-enabled globe that greets visitors, students and alumni with real-time exploration of the global Thunderbird community. The globe will soon connect with 50,000 alumni and students through social media interaction, with activity and locations being constantly updated and represented on the globe. Thunderbird faculty, as well as visiting global leaders and dignitaries, can present in the

Global Forum, where their remarks are virtually accessible to any place and to anyone, across the globe.

Additionally, the school’s Innovation Center serves as a hub of experiential activity for students, complete with a global situation room and virtual reality suites to prepare students for their fieldwork. The center also hosts immersive language technologies, the cutting edge in language acquisition, as Thunderbird fully reinstates language education in its programs while embracing new learning paradigms.

Regional lounges celebrating Thunderbird’s unique worldwide heritage are located throughout the building. A variety of historic art representing a variety of artifacts from Africa, Asia, Latin America and Europe are displayed in each of the lounges. All of the artwork was generously donated by Thunderbird alumni, leaving a lasting legacy that can be enjoyed by many within the walls of Thunderbird’s new global headquarters.

Showcasing the true traditions of the school is the top-floor Thunderbird Pub, a place for alumni, students, faculty, staff and the greater community to build relationships while they eat, drink, study or just connect with each other. The Thunderbird Pub was designed to capture the spirit of the school’s original campus in Glendale, Arizona, with a purposeful look toward the future. The rooftop location features views of the Phoenix skyline and the symbol of the Thunderbird lit from the roof into the Arizona night sky.

“Thunderbird was born in the aftermath of greatest conflict the world has ever seen, and rather than create another West Point or Sandhurst, forward-thinking leaders had the audacity to create an institution of higher learning focused on trade and commerce, a school where people could learn the value of working together, serving the values of democracy while seeking prosperity and peace,” said ASU President Michael Crow.

“With the support of Thunderbird alumni from around the world and by applying the full commitment of Arizona State University, we are focused together on the next 75 years in a world where the school and its graduates are needed more than ever. It is an ongoing mission that will never be complete.”

See more of the celebration: View photos of the event here.